Amritsar in Punjab is one of the most ancient and fascinating cities of India. It is an important seat of Sikh history and culture. Amritsar has various historical and religious sites. The most famous of them all in the Golden Temple which was founded by the fourth Guru of Sikhs, Guru Ramdas and completed by his successor Guru Arjan Dev.

Climate : Cool in winter, temperature can go down to 0 deg C.  Hot in summer.

Road : Drive all along the NH 1 to Amritsar via Sonipat, Karnal, Ambala, Ludhiana, Jalandhar and Beas. The road is excellent and mostly one way all the way. One can cover this distance in about 7-8 hrs. Lot of options to stop on the way.

Train : Daily trains available from Delhi, the most convenient being the Shatabadi. For more info check the Indian Railway website

Air : Amritsar is the only international airport of Punjab, daily flights are available from Delhi in

Golden Temple, also known as Harmandir Sahib and Darbar Saheb. Completed in 1604 by the fifth Sikh guru Sri Arjan Dev, Maharaja Ranjit Singh  decorated the lower half of the temple  with marble while the entire upper half was inlaid with copper covered over by gold plate. People from all religions come here to attain peace and tranquility in their lives. A dip in the sarovar is held as auspicious.

Durgiana Temple, Situated outside the Lohgarh Gate it is built after the design of the Golden Temple and attracts sages and scholars in Hindu scriptures from all over India.

Jallianwal Bagh, Martyrs' Memorial built in the shape of eternal flame of liberty is situated on the outskirts of Golden Temple. Here, about 1500 to 2000 persons who were attending a peaceful meeting during the freedom movement fell under the bullets of the British General Dyer, on April 13, 1919.

Wagah Border Situated about 30 km from Amritsar on the way to Lahore is the Wagah border Indian Army outpost. Every day in the evening a 'Beating the Retreat' ceremony is held by soldiers of both sides when the border gates are closed and the national flags are lowered down with great fervour and enthusiasm. A great collects daily to watch this ceremony and stands have been erected to watch it. Only private transport is available to reach Wagah.

Khalsa College is a masterpiece of architectural design and structure, this college constructed in the early 1900s is a beautiful sight specially when it is all lit up in the evening and can be visited on the way back from Wagah border.

Company Bagh and Ranjit Singh's Museum is also worth visiting. 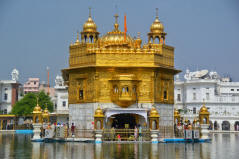 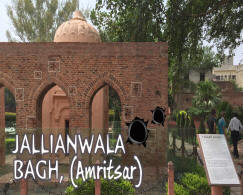 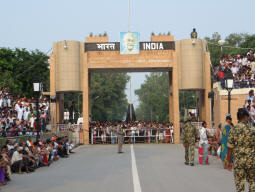 Get special   package for individuals and groups